It was March of 2001, and I was sitting in a restaurant eating wings with my pastor, Chris Hodges, who just over a month before had planted a church in my hometown of Birmingham, Alabama (Church of the Highlands). With March Madness basketball going on in the background, and the two of us glancing at the big screen every once in a while for a score update, I found myself opening up to someone who was still kind of a stranger. He listened as I shared stories of both my accomplishments and frustrations in ministry life. Looking back it is clear that what I was actually doing was verbally throwing up on him; but still he sat there the whole time, with encouragement in his eyes, just listening to what I had to say. Before we left, he gave me a word of advice that wouldn’t fully make sense for another five plus years. He said,

“Live your life to make someone else’s dreams come true.”

When I first surrendered my life to Christ, I began to walk out the passions He placed in my heart. Those passions would quickly turn into opportunities, and then opportunities would organically become the new normal. At some point I shifted from “serving others” to “doing ministry”, and I became incredibly task oriented and would end up running over people to get things accomplished (all in the name of God). That would go on for years, until a family tragedy shifted my perspective.

In October of 2006, after a long season of unsuccessful attempts at getting pregnant, my wife, Sommer, and I found out that we were having our first baby. We were so excited, and the expectations of the future were overwhelmingly joyful. But one evening, Sommer said that she wasn’t feeling right, and so we scheduled an ultrasound for the next day. When the ultrasound nurse began to see inside the womb, I could see by the look on her face that it wasn’t good news. And then she uttered the words we were dreading to hear… “There is no heartbeat”. We lost the baby.

It was just before Christmas, and we were neck deep in the grieving process. I was previously scheduled to play for our church’s Christmas services, and Sommer encouraged me to push through. During the dress rehearsal the team began to sing “Agnus Dei” by Michael W. Smith, and God’s presence was so tangible in that room. It felt as if He was wrapping His arms around me and holding up my broken spirit. A time of healing was happening, and in the midst of sadness…I was hopeful.

During this time of grief, my wife and I were closer than ever before. We would often pray together, and then split off and have our own personal time with Jesus. On one occasion, a couple of nights before the New Year, I was reading my Bible (to this day I can’t recall what verse) and I had a random thought. I sensed the Holy Spirit’s voice asking me,

“When is the last time you sat across the table from someone to listen to what they had to say?”

Now this question doesn’t seem deep. In fact, in the moment I began to debunk the idea that there was even any weight to this “out of left field” notion. “Of course I have listened to plenty of people”, I thought. “I mean, just the other day I…”. Or “a few weeks ago me and…”. Nothing… the truth is I couldn’t remember the last time I spoke with someone without carrying my own agenda to the table. I had spent so much time focusing on my own pursuits, that I lacked awareness towards the needs of others. I believe this is something that God had been whispering to me for a long time, but now I was finally listening.

That night I told the Lord that 2007 was going to look a lot different.

Immediately I began scheduling coffee appointments with friends and acquaintances that had previously reached out. Week after week, month after month, there we were… a table for two. They would speak, and I would listen. The first couple of times I would have to physically grab the table underneath, in order to keep myself from interjecting my opinions and “solving their problems”. I stayed quiet nonetheless. And in one of those moments, my ministry life was completely revolutionized. After the first few meetings would end, each person would tell me how much help I was to them, and how much better they felt. The crazy thing about it was that I didn’t say anything during our time together. And then it became so obvious… If I make myself available to people, God’s power will work through me. It’s not rocket science… it’s actually that simple. I was living something that I had read many times in Ephesians 3:20: “Now to Him who is able to do immeasurably more than all we ask or imagine, according to His power that is at work within us”.

We can never forget that real ministry is simply loving God and loving people.

It can be so easy at times to let our identity get caught up in our tasks and gifts, but we have to renew our minds daily with this truth: Our identity is in Christ, and our gifts are for service.

Those hours of coffee talks that were spent with a few, have now multiplied into an army of leaders, developers, team members, and friends. It’s amazing what can be accomplished when you live your life to make someone else’s dreams come true.

FOUR WAYS TO MODEL SERVANT LEADERSHIP TO SOMEONE:

1. Invite them to be part of what you do. – (We have a monthly orientation and audition opportunity for individuals who show interest.)

2. Invest your gifts and time into them. – (We have a weekly development process called Infuse [we will discuss in a later post].)

3. Initiate feedback, and give practical steps that will get them closer to walking out their gifts and passions. – (We have frequent touch point meetings to provide feedback and progress to each individual.)

4. Implement them into the area of their ability / passion / calling. – (We have daily opportunities for team members to operate in their gifts and passions.)

Church of the Highlands 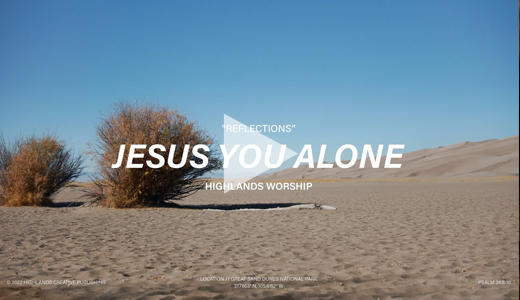