What I’ve Learned over the Years

Through my years I’ve been with Highlands Worship, I’ve had the privilege and honor of recording electric guitar parts for several projects. With each project, I’ve learned something different through each recording process. I’ve learned to be able to accept productive feedback and use it for future recordings as well as live services. Going through several recordings has also taught me to be so much more aware of everything that’s going on in a song, whether that’s other instruments or vocals, and to support those different areas instead of overplaying and becoming a distraction to the song. One last area I’ve been working on is to not be afraid to take time out during a song to worship instead of feeling like I have to be playing my instrument at all times. After all, whether you’re recording worship music or playing it live, they are worship songs and are meant to praise Jesus and lead others into doing the same.

In every area of life, we know that we need to strive to be humble and to accept the criticisms of those people in our lives who are trying to build us up and teach us.

However, it’s not always easy.

The first recording project that I participated in at Highlands was very exciting for me. I was asked to be a part of recording a song for Highlands Motion Student Conference in 2011. I remember the full band beginning to workshop the song several times, and each time I would come in with different guitar melodies and ideas. I would go home after the workshops and spend a good bit of time writing parts, then present them at the next workshop. I loved the parts that I was writing and each band member seemed to like them too.

When we got ready to record, the recording engineer, the producer and I went to the recording room. I had all the ideas in my head of how I wanted each part to sound. So, I began to play my parts for the song. I almost immediately started getting critiques of what I was playing, how I was playing, and if I was playing in tune. I was unsure of what to do with all this information that I was given, and honestly, I was frustrated. I had spent hours and hours writing guitar parts that I thought were so awesome and fit the vibe of the song so well, and here I was getting ready to record, but was being asked to play something else. I’m not someone who normally shows a lot of emotion in public, so I kept my frustration to myself and made changes based on what the producer and engineer suggested. But, once we were on a roll with the song, I began to see the reasons why I was being asked to play differently. Most of the time, the part I came up with was conflicting with the vocals. Being a young guitarist and having never recorded before, I began to realize how every instrument and vocalist work together to create a specific sound for each track.

With preparing electric guitar parts for Here I Surrender, Highlands Worship’s latest album in 2016, I knew that I wanted to be 100% supportive of the vocals and every instrument being played, because of what I learned in recording previous projects.

Even though the electric guitar is a lead instrument, it’s so important to realize that each instrument has its place to create a unique sound for the specific track you’re recording.

Be aware of the tone of the song. Is it a quiet, more worship-driven song? Let the vocals shine and tone down your instrument appropriately if the song calls for it. Is it a more fast-paced track? Amp it up to match the energy of the song if that’s needed. Being aware of the rest of the instruments and vocalists sounds like a given, but it’s always helpful to ask yourself on each track what type of vibe or sound is being conveyed and adjust accordingly.

Through the years, I’ve not only learned how to be supportive when recording guitar, but I have learned to be so much more aware of what I’m playing in a worship service at church.

I used to overplay so much during a worship set, meaning that I’d have my hands on the guitar at all times, playing through the quiet parts and louder parts of the song.

Now I know that it is totally OK to not even play at certain parts of songs. This has literally been a life changing experience for me, because as an introvert, I’ve always been scared to lift my hands and worship God from the stage. But through the years, God has shown me that I don’t have to hide behind my instrument, or overplay during a song because I was scared to worship from stage with the fear of everyone looking at me. God wants me to lead others in worship through my instrument and be an example of what a worshipper should be.

Being a member of Highlands Worship is such a blessing, and it amazes me how God continuously shows me new things through each recording. I’m able to take what He’s taught me and what I’ve learned from the worship team and apply it to how I play in live services, which can make me a better musician and bring me closer to God.

Church of the Highlands 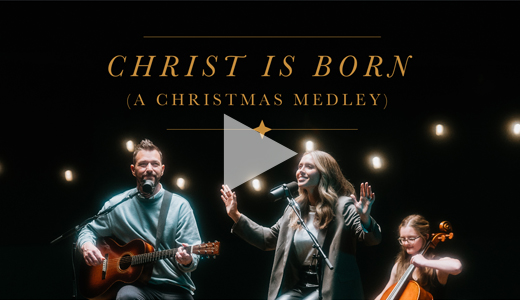